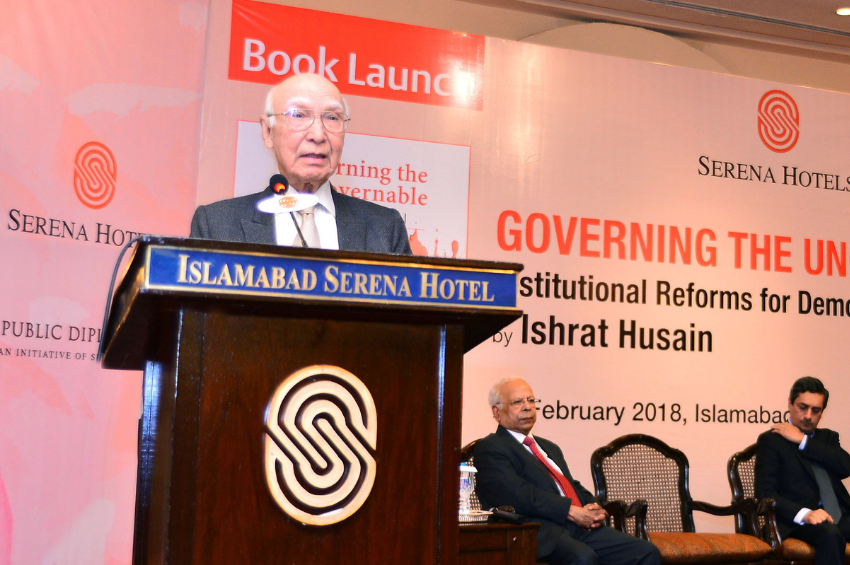 ISLAMABAD: A book launch and panel discussion was held at Islamabad Serena Hotel around Dr. Ishrat Husain’s latest book, “Governing the Ungovernable”; Institutional reforms for Democratic Governance. Dr. Husain is renowned economist, a former governor of the State Bank of Pakistan and served as Dean and Director of very prestigious institution of Pakistan; the Institute of Business Administration (IBA) Karachi till 2016.

Dr. Husain’s book examines the reasons why Pakistan was a top performing developing country for the first forty years of its existence and in the subsequent thirty years became a laggard. Pakistan, since its independence in 1947, had to face tumultuous years for the first four decades. Despite the many challenges, both internal and external, the country was able to register a 6 percent average annual growth rate during the first forty years of its existence. The country was ahead of India and Bangladesh in all economic and social indicators. Since 1990, the country has fallen behind its neighboring countries and has had a decline in the growth rate.

The book attempts to examine the reasons behind this slowdown, the volatile and inequitable growth of the last twenty-five years, and through a process of theoretical and empirical evidence argues that the most powerful explanatory hypothesis lies in the decay of institutions of governance. It also suggests a selective and incremental approach of restructuring some key public institutions that pertain to accountability, transparency, security, economic growth, and equity.

Mr. Sartaj Aziz complimented Dr. Husain’s work while presenting an overview of the book. He said, “Ishrat’s main purpose is to ask if Pakistan can become governable again – his answer is yes, it can and then he goes on to present a long term agenda for institutional reform which is both complex and difficult to implement but if achieved will result in growth and equitable development”.

He added, “I agree with the gist of the book. The decline is the resultant interplay of many factors and Ishrat does, however, rule out many factors – I feel that his passion for institutional reform is so great that he has downplayed the significance of some factors which have bearing on the cause and effect of economics”.

Dr. Sania Nishtar said, “I thank Dr. Ishrat for his scholarship, for his integrity and for the manner in which he has represented the country abroad. The book is apolitical emphasizing policy continuity and the crux is, of course, institutional reform”.

Illango Patchamuthu said, “The book provides a great reference point for the first 70 years of Pakistan’s existence with the first 40 years as a success, and 30 years as stagnation. Pakistan is a resilient economy that stays at a low equilibrium performance”.

Sakib Sherani agreed with the hypothesis of the book calling it a seminal work.

Dr. Ishrat Husain explained that the book examined some of the well-entrenched and popularly held myths about the Pakistani economy, ruling out factors such as security and terrorism, foreign assistance, military rule, the global economic conditions, all of which may have played some role in the poor performance but empirical evidence did not support them as the determinants of the performance. Dr. Husain suggests that is the weakening of civilian institutions of governance that caused Pakistan to lag behind. He thanked Serena Hotels and the panelists for supporting the event.