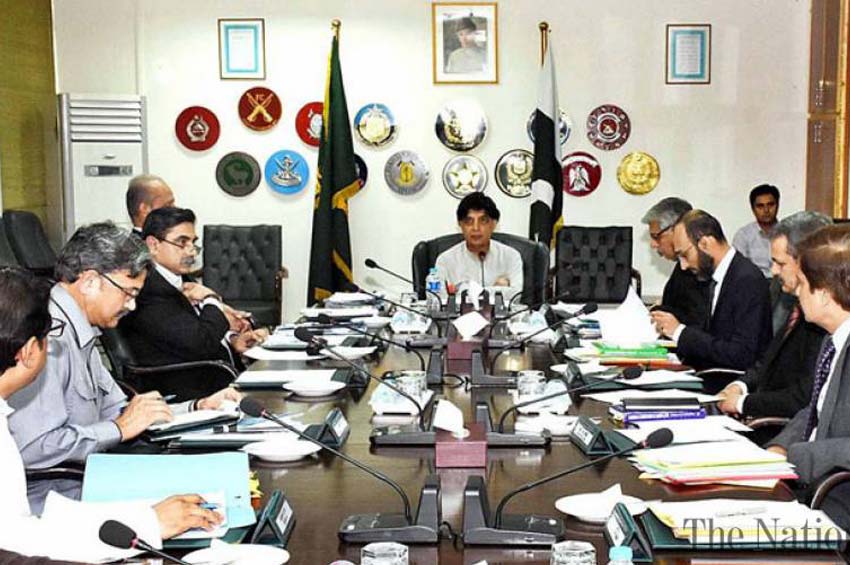 ISLAMABAD: The Interior Ministry on Thursday, 13 April, decided to impose complete ban on issuance of visas on incomplete documents and directed all authorities to ensure indiscriminate implementation of rules and regulations regarding issuance of Pakistani visas to foreigners as well as their arrival and stay in the country. The ministry ordered all relevant government departments to strictly follow immigration rules pertaining to the entry, exit and stay of all foreign officials in Pakistan.

In a meeting held in Islamabad, chaired by Interior Minister Chaudhary Nisar, it was decided that all departments, including Civil Aviation, Immigration, and the Ministry of Foreign Affairs, will need to hand in complete details on any foreign personnel visiting Pakistan to the interior ministry.

In order to ensure impartiality in matters relating to Pakistani visas, the meeting decided that in future all Pakistani Missions abroad and personnel deputed for visas issuance would be responsible for complete assistance to foreign visa applicants and for maintaining record of visa issuing official and sharing of details with Ministry of Interior forthwith.

Taking strict notice of negligence in ensuring implementation of set rules and regulations and other irregularities in connection with those foreigners who come to Pakistan for hunting purposes, the minister directed all Pakistani Missions, Civil Aviation, FIA and Immigration authorities to make sure that all foreign delegations and their staff, visiting Pakistan, should be issued visas only after provision of required documents and they would only be allowed to enter Pakistan after establishing their legitimacy.

The minister further directed that details of foreign delegates regarding their arrival in Pakistan and their activities during stay would be provided to Ministry of Interior at least one week before.

The minister said this should also be ensured that prior security clearance for visa should be sought from the ministry of interior in case of need.

The interior minister directed CAA and FIA to ensure that transportation of staff of foreign delegates and guests coming in advance to Pakistan for hunting purposes would be made only through international airports and no one should be allowed to enter Pakistan without required immigration process.

Chaudhry Nisar said any negligence in this regard would not be tolerated and those responsible for the sloth would be taken to task.

Nisar directed the FIA and Federal Bureau of Revenue (FBR) to make sure establishment of counters equipped with all necessary facilities for immigration clearance of foreign Heads of States and their guests who would come to Pakistan through private flights at any airport with prior approval of the government.

The minister said in view of irregularities in visa matters in past, it is important to review visa laws and relevant SOPs and at the same time their implementation must be ensured.

The interior minister said in past national security was compromised, laws of the land were violated and national image was damaged through issuance of visas illegally, adding that integrity and sovereignty of the country demands that implementation of rules and regulations must be ensured without any discrimination.

Leonardo Dicaprio Saves | Crewman Who Fell Overboard In The Caribbean

Tobacco Price Doubled | Shisha Will Not Go Costly in Restaurants

A powerless in world above the law